Cost Compared to the region:

Cost Compared to the region:

Cost as percent of GDP:

Estimated blood lead levels in children for the year 2008. Derived from country studies or, if not available, calculated using our regression model (see “Our Research” for further details).

Lost economic productivity (in international dollars) per each IQ point decrement attributable to lead exposure. Based on the association between decrements in total IQ score and decreased lifetime earning power.

Population under 5 years of age:

Population at risk, represented by each 1-year cohort of children under five years of age (UN population estimates).

This map reflects the results of research by New York University that estimates the economic costs linked to childhood lead exposure in low- and middle-income countries (LMICs). This research is unique in that it represents the first attempt at estimating economic impacts of lead exposure in LMICs.

Exposure to lead has a permanent negative impact on children's developing brains. One impact is a reduction in intelligence quotient (IQ), which can be correlated with decreases in lifetime earning potential. Lead exposure has already affected the lives of many of children around the world. Unless measures to prevent exposure become a priority, many more children will continue to be affected. This map is intended to raise awareness of the economic impact of lead exposure in LMICs and the need for action.

Estimates of the economic costs of preventable lead exposure in children have been useful for decision makers in certain parts of the world, but until now, have not been available for LMICs. Without clear estimates of the country-level costs of childhood lead exposure, it can be easy to underestimate the importance of this public health issue and the magnitude of the impact of any public policy aimed at reducing lead exposure.

The research analysis focused on the neurodevelopmental impacts of lead, assessed as decrements (or reductions) in intelligence quotient (IQ) points, and how this translates into decreases in lifetime earning potential, assessed as lost lifetime economic productivity (LEP) in each country examined. By estimating the decrease in earnings potential (lost LEP) from children affected by lead, we can fully appreciate the potential economic benefits of preventing children's exposure to lead in LMICs.

The research findings indicate that lead exposure still is a major contributor to children’s intellectual disability in LMICs, which translates into a cost of $977 billion (range $728.6–1162.5 billion) of international dollars, with economic losses equal to:

Overall, the burden associated with childhood lead exposure in these countries amounts to 1.20% of world GDP in 2011.

For comparison, the economic impact of lead exposure in developed countries (US and Europe) is $50.9 and $55 billion, respectively. Also, when considering official development assistance (ODA) to developing countries, the economic impacts of lead exposure are comparable or, in some cases, greater than the net assistance received. View the data table: Economic Costs of Childhood Lead Exposure in LMICs compared to ODA received by LMICs.

The removal of lead from gasoline is one of the most important accomplishments for children's health in the 20th century, with economic benefits that have been estimated at $2.45 trillion each year.1 In the industrialized world, there has been further progress in reducing lead exposure from other sources, including paint.

However, in LMICs lead exposure remains a problem for children, especially from lead in paint. One of the most important things we can do to decrease children's exposure to lead in LMICs is to ensure lead is no longer used in household paint and other paints to which children may be exposed (such as paints on playground equipment). To learn more about how to get lead out of paint in your country, visit the Global Alliance to Eliminate Lead in Paint.

How the Cost Impacts Were Calculated

Estimating and aggregating foregone future earnings (lost lifetime economic productivity or LEP) provides a sense of the potential economic benefits of preventing childhood lead exposure. While this had been done for developed countries, it had not been done in LMICs, as this kind of analysis is often limited by the lack of data on blood lead levels (BLLs) in these countries.

To overcome this limitation, we developed a regression model that allowed us to predict mean blood lead levels in children in those countries for which BLL data are not available. This is a significant advantage over the methods used in other economic analyses, because we were able to estimate BLLs in regions of the world, such as Central Africa or Central Asia, for which recent or complete data were not available. From this, we estimated IQ loss for each country over a range of BLLs, the percent lost LEP per IQ point, and the total lost LEP in the countries included in our analysis. 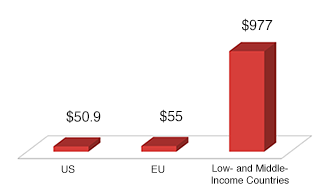 Cost in Billions of Dollars 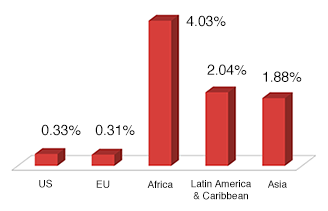