An 84-year-old male with a history of atrial fibrillation and lung cancer who was examined via bronchoscopy 3 days before admission presents with acute onset shortness of breath. He is tachycardic, with a heart rate of 115 beats per minute, and hypoxic, with 95 percent oxygen on readmission. He has diminished breath sounds bilaterally and crackles on the left lung.

We see a large amount of anechoic material above the diaphragm consistent with a pleural effusion. 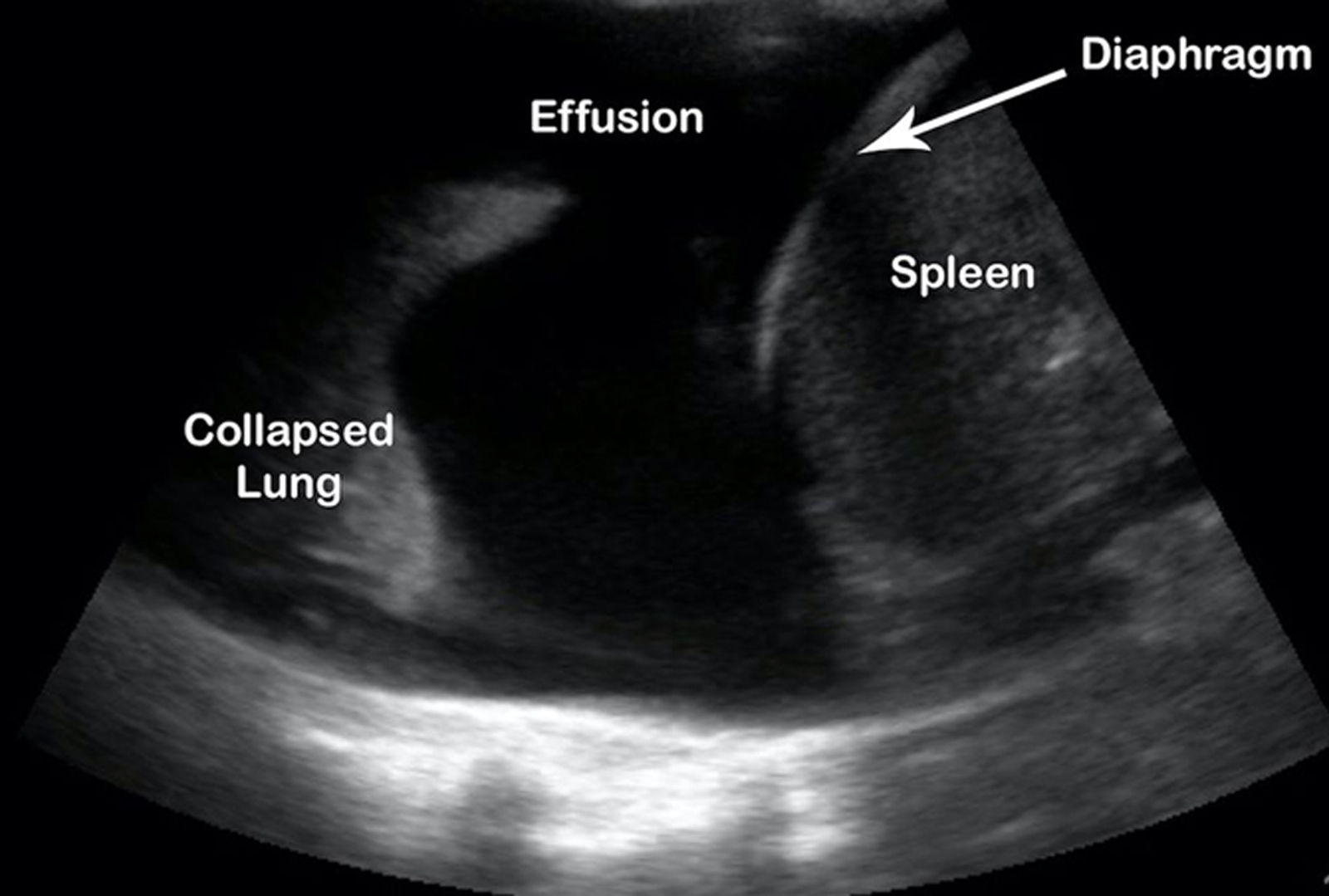 A pleural effusion is a pathologic accumulation of fluid in the pleural cavity and is classified by type: blood (hemothorax), serous (hydrothorax), chyle (chylothorax), or pus (pyothorax/empyema); and also classified by cause: exudative or transudative.

The linear high-frequency probe is indicated when evaluating a patient for pneumothorax. However, the low-frequency transducer is optimal when evaluating for effusions. Furthermore, visualization of the effusion can allow you to estimate the size and evaluate the character to identify septations or other pathology that may indicate a complicated effusion.

Lung ultrasound has a higher diagnostic accuracy when identifying effusions as compared with X-ray. Sensitivity and specificity of lung ultrasound is 94 percent and 98 percent, respectively, as compared with X-ray, for which sensitivity and specificity is 51 percent and 91 percent (Yousefifard, et al). Small amounts (5 mL) may be seen, but minimum amounts of 20 mL or more are more reliably detected, with sensitivities reaching 100 percent with effusions more than 100 mL (Soni, et al).

An 83-year-old female with a history of breast cancer presented to the emergency department in extremis. Vital signs were notable for heart rate 117, respiration rate 30s, blood pressure 90/70, and oxygen saturation at 90 percent on room air. Her complaint was of an acute worsening of shortness of breath.

The differential diagnosis for hypoxia includes the following:

We used bedside transthoracic echocardiography to narrow our differential and guide treatment.

View an ultrasound to see the “d” sign in a massive pulmonary embolism.

View an ultrasound to see the atrial clot in a massive pulmonary embolism.

The obvious abnormalities on this ultrasound include the following:

What is difficult to assess on these views is McConnell’s sign: mid-right-ventricle-wall hypokinesis with apical sparing.

The ultrasound findings are consistent with acute right heart strain secondary to a massive pulmonary embolism.

The patient was given thrombolytics (tissue plasminogen activator), which resulted in the resolution of the clot.

An 81-year-old female with a past medical history of colon cancer who had a recent colectomy presents with dyspnea on exertion, palpitations, and left lower extremity swelling. The patient was found to be hypoxic to 89 percent on readmission and had left leg swelling with tenderness to palpation of posterior calf.

View the ultrasound of the left popliteal vein with color Doppler.

Blood clots are most likely to occur at junctions of veins. Therefore, the limited compression deep vein thrombosis (DVT) study must include the common femoral vein at the great saphenous vein junction to the superficial femoral vein and deep femoral vein bifurcation and popliteal vein to the popliteal trifurcation.

A high frequency vascular probe (6 to 10 Hz) should be used. If the patient has a lot of overlaying tissue, a lower frequency curvilinear probe can be used. The patient should be positioned in the reverse Trendelenburg position with their hip in mild external rotation and knee slightly bent. This position will maximize the distension of the leg veins.

Evaluation is done by compressing the veins with the probe perpendicular to the patient and assessing for complete apposition of the anterior and posterior walls of the vessels. Inability to completely compress the vein suggests a clot. The clot itself may be visible in the vein as echogenicity within the lumen.

Other techniques that can provide further information about the patency of the vessel include the following:

After the positive DVT study in the emergency department, the patient was started on anticoagulation and admitted to the intensive care unit. The patient remained stable and was weaned off of supplemental oxygen by day two and subsequently discharged by day six. The patient was prescribed Eliquis®.

View an ultrasound demonstrating the anatomy visualized during a routine study of the proximal aorta.

The following images are stills taken from the clip to identify the structures: 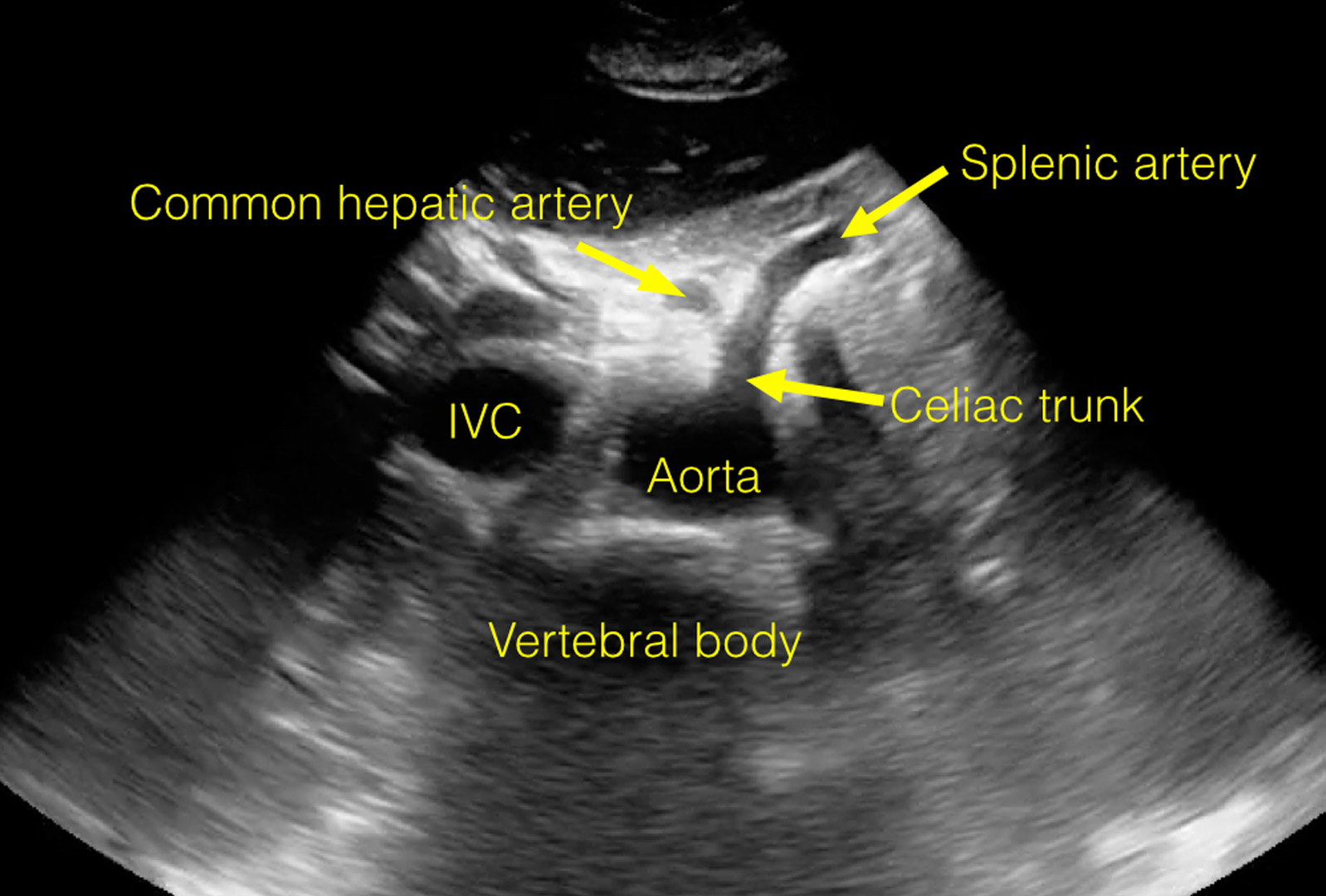 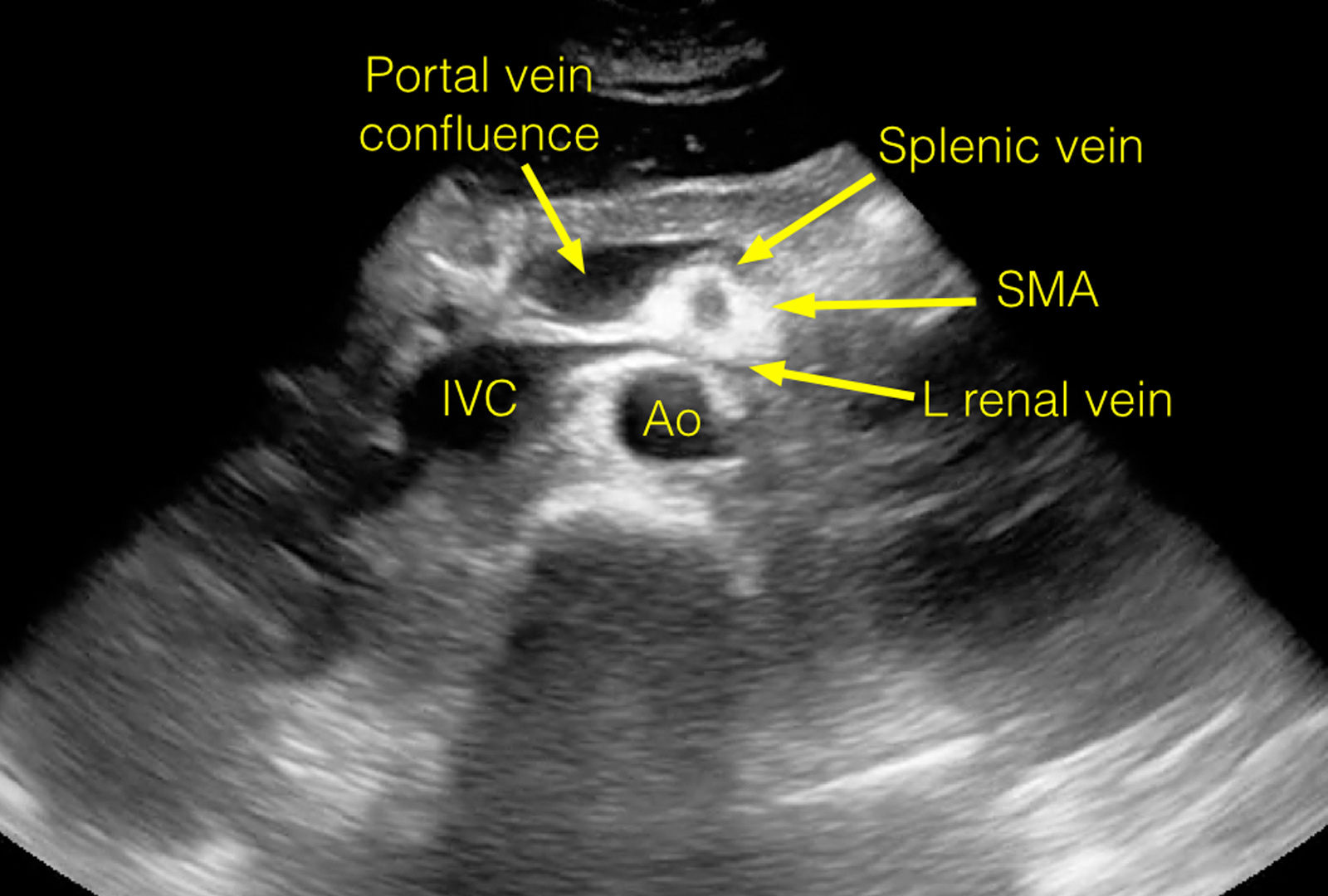 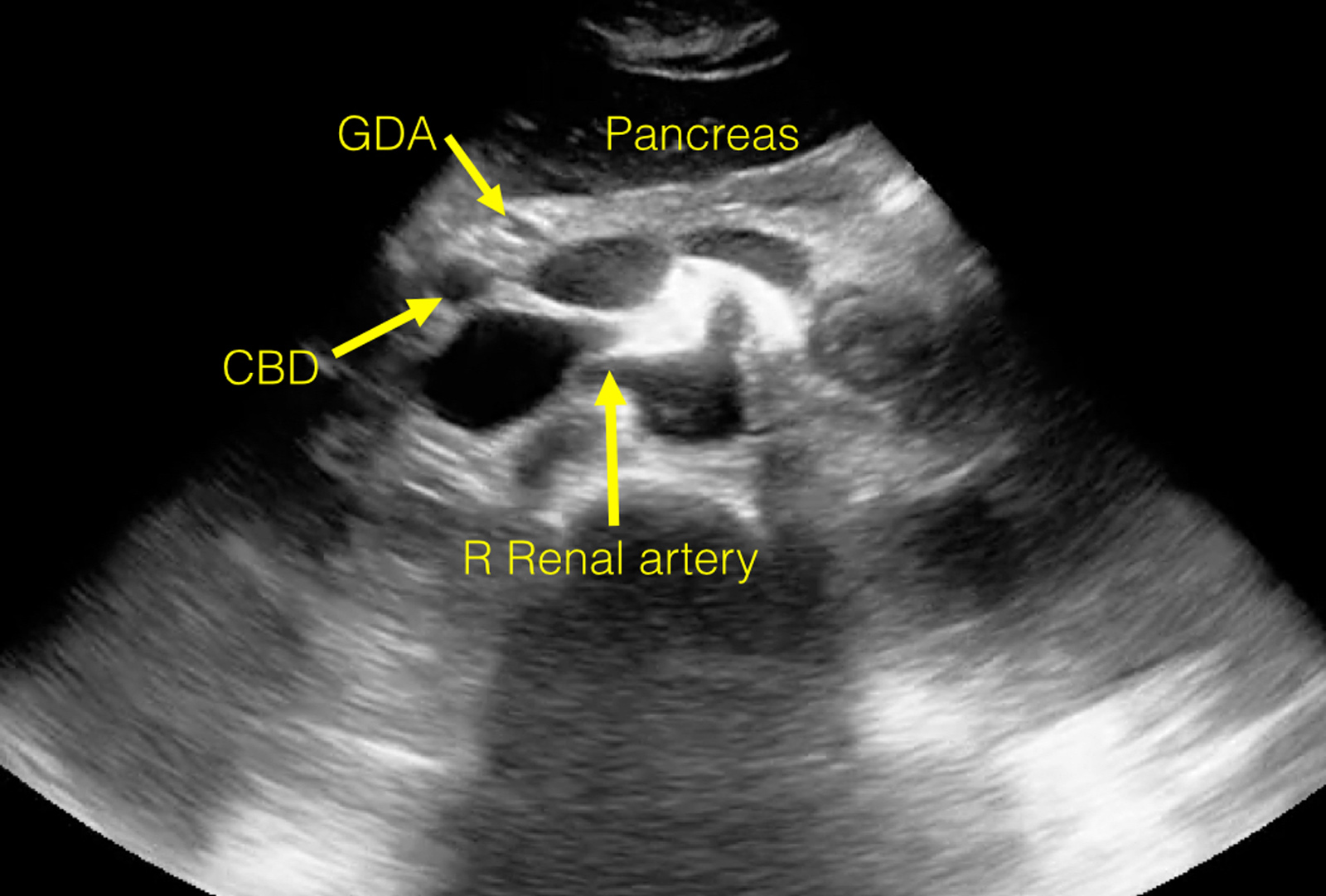 The twinkle artifact (also sometimes referred to as the color comet tail artifact) is a color Doppler phenomenon that appears as a rapidly changing mixture of color around a stationary object, often around ureteral stones.

A couple of theories have suggested that the “twinkle” occurs either because of a strongly reflective medium with a rough surface (Rahmouni et al.) or because of a narrow band of intrinsic sonographic machine noise generated by slight random time fluctuations in the path lengths of transmitted and reflected acoustic waves (Kamaya et al.).

Ahmad et al. evaluated this as well and determined that the color Doppler twinkling sign can aid the gray scale ultrasound detection of a urinary calculus, especially if the stone is indistinguishable from the surrounding structures or lacks a posterior acoustic shadow.

Ahmad SK and Abdallah MM. The diagnostic value of the twinkle sign in color Doppler imaging of urinary stones. The Egyptian Journal of Radiology and Nuclear Medicine. 2014. DOI.